Best Shoes for Shuffling Gait for Elderly and Dancers

How To Clean Converse Shoes -Step By Step Guide

At the end of the day, most of us will be very relieved to kick off our work shoes and just be done with it for the rest of the day. Doesn’t it feel good when those shoes finally come off and your poor feet have room to breathe?

The same is true for when it’s sunny out and you’re enjoying your day in the warm hot sun, maybe even near the water. Or maybe you just have an inflatable tub installed in your backyard where the kids like the play. Who am I to judge?

Whether you’re in an inflatable tub or you’re at the beach… odds are that you’ll want something decent to wear on your feet. Many people absolutely have to have really good arch support on their feet, because of the fact that they have fallen arches, or maybe they’ve got other foot health problems, such as Morton’s neuroma or plantar fasciitis.

If that’s you, you don’t wanna be running around on your bare feet, even when you’re on holiday at the beach. The sand won’t give you any good arch support. If you’ve got good flip flops with arch support, however… then your problems are solved.

Flip flops can’t have insoles, for obvious reasons. Unless you’d superglue them to the footbed. I tried that once. Quite the mess. Wouldn’t recommend it. Instead, just go for a good flip flop that will support your fallen arches, so that you can stand up straight during your holiday and have fun, despite suffering from a foot problem. 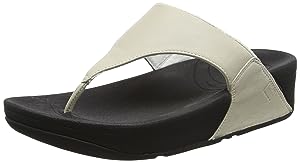 Right off the bat, we can see that we’ve got something special here. Look at those thick soles. Doesn’t that make you want to at least try them on? I know I do, and I’m a guy!

It was in 2006 that FitFlop CEO Marcia Kilgore set her mind to a certain mission. She wanted to go out there and create the very most comfortable flip flops in the world. Right from the start, she collaborated with no less than two biomechanists. From this cooperation, pretty soon FitFlop’s MICROWOBBLEBOARD technology was born. Read more about that down below. This is the story of how FitFlop flip flops became the most comfortable flip flops for supporting your arches came about. Millions have been sold. And this Lulu Thong model is one of the most popular ones out there.

The sole is synthetic, but the strap is made of leather. The heels measure around 1.75″, which is considered to be pretty thick for a flip flop. The platform itself is 1″, which is still pretty thick.

This is a so called wedge sandal, which features a thong strap that has a solid tone. It’s a very simple design. You either love it or hate it. Most people love it though. The strap has an embossed logo at the side.

This FitFlop flip flop for fallen arches comes with the so called MICROWOBBLEBOARD technology. This means that it has a triple density construction. The sole has been ergonomically designed in order to give you the best comfort for your underfoot, by providing it a great deal of cushioning.

FitFlop’s footbed technology makes it so that FitFlop’s shoes are manufactured in such a way that it will properly align your whole body with every step you take.

The average person takes around 220 million steps in their lifetime. As many of those steps need to have you standing in a good position, or your posture and your joints will suffer as a result of that.

Thanks to FitFlop’s biomechanically engineered footwear, you can rest assured that you’ll have a healthy posture while standing and walking on these flip flops, which do a really great job of supporting your arches while you go about your day.

These flip flops run a little bit on the large side, so you might want to consider order half (or a whole) size down. It kind of depends on your previous experiences with footwear. You’ll have to use your common sense.

Also, one reviewer claimed that they might not be suitable flip flops for wide feet, as she described these as a tad bit on the narrow side. Buyer beware… if you’ve got very wide feet, this flip flop might not be the best match for you.

Most reviewers are of the opinion that this flip flop gives you superior support and comfort, when you look at the price.

Some will be of the opinion that the sole is stiffer than they had anticipated. But you simply can’t have too soft & flexible of a sole if you’re going to create a flip flop that has to give you decent support. You’ll probably break them in though. At their budget price tag, it’s hard to go wrong!

Hello, I'm Cindy. I’m a super duper mega hiking enthusiast, with a love for everything that has to do with outdoors, hiking, gear, footwear and more.