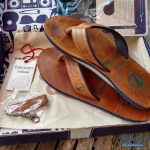 With mother nature bearing down ungodly amounts of heat on us in the past few years’ summers, owning a pair of really good flip flops quickly becomes a necessity. When I was young, I never was much of a fan of flip flops. They always felt so cheap and tacky. But that wasn’t flip flops’ fault… it was my own. For too many years, I walked around on a $15 pair of uninspiring flip flops during the summer. That all changed when I started to regard flip flops as actual footwear and decided to shell out for a pair of good ones, just like I do with hiking boots and running shoes.

After an hour of research, it was the Nokona by Hari Mari that caught my eye. Its brown leather look reminded me of a sturdy pair of high quality leather hiking boots. Yeah, I know… I probably shouldn’t be comparing flip flops to hiking boots, but I just can’t help being impressed with footwear that looks like it’s solidly built. And the Hari Mari Nokonas look exactly that to my every-observing, critical eye! 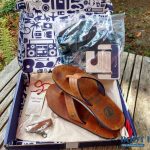 I purchased the Hari Mari’s Nokonas online and sure enough the package arrived on my doorstep a short while later. Since the Internet is really big on unboxing, I realized I couldn’t get away with not snapshotting the box and its contents. Next to the flip flops itself, the box contains a nifty keyhanger and a handy dandy linen bag for transporting things in, such as… flip flops!

While I mostly use the bag for doing small grocery errands, I’m actually using the keyhanger. Might as well, it’s made of quality leather, just like the Nokonas themselves. Speaking of which… the Nokonas look just as good in real life as they do in the pictures. Right off the bat, I loved the Indian design. It gives these flip flops a genuine feel to them. 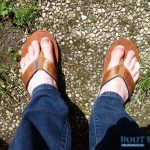 It didn’t take me long to start wearing these. Straight out of the box, I put them on my feet and started walking around the house. It had been years since I had seriously attempted to wear flip flops. It felt a little unyieldy at first. But he who perseveres, wins. And I must say that I got used to them pretty quickly. Matter of fact… it took me only a few days to get used to them so much that I am now wearing them pretty much every day. It used to get out of bed on bare feet and walk around before putting on my shoes and getting to work on things. These days, the first thing I put on my feet are my Hari Mari Nokonas. I strongly prefer having some support on my feet, rather than having my tootsies be in direct contact with my cold floor. 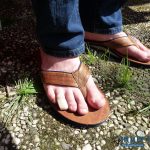 Since I unexpectedly started liking my new flip flops so much, I decided I was going to put them to the test. When I am not hiking, I frequently take walks around the block in my neighborhood. These walks are usually about an hour long and I’ll traverse about 2-3 miles or so. Since it was a day off for me and it was very hot, I wasn’t in any particular rush. So instead of putting on my sneakers on, I decided to do my daily walk in my flip flops. 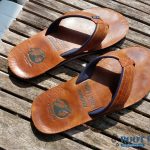 I was mentally preparing to have to turn back a quarter way through the walk. Surprisingly enough, that didn’t turn out to be necessary at all. The toe post on the Hari Mari Nokonas is indeed very comfortable. I’ve done multiple one hour walks on them since the first one, and all I got was a tiny bit of chafed skin in between my toes. It was nothing a little skin cream couldn’t solve and I’m still taking my Nokonas for a walk every once in a while. 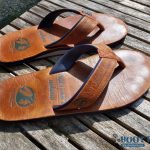 I highly recommend Hari Mari’s Nokonas flip flops. They’re soft, comfortable, high quality, and hardly show any sign of wear and tear despite the fact that I’ve been walking around on them for miles and months. They are pricey, but just like with every other footwear I’ve ever come across… you get what you pay for. You want quality flip flops that will make you look distinguished? Then Hari Mari is a good choice for sure!

Click Here To Get Hari Mari Flip Flops For Men!

Click Here To Get Hari Mari Flip Flops For Women!