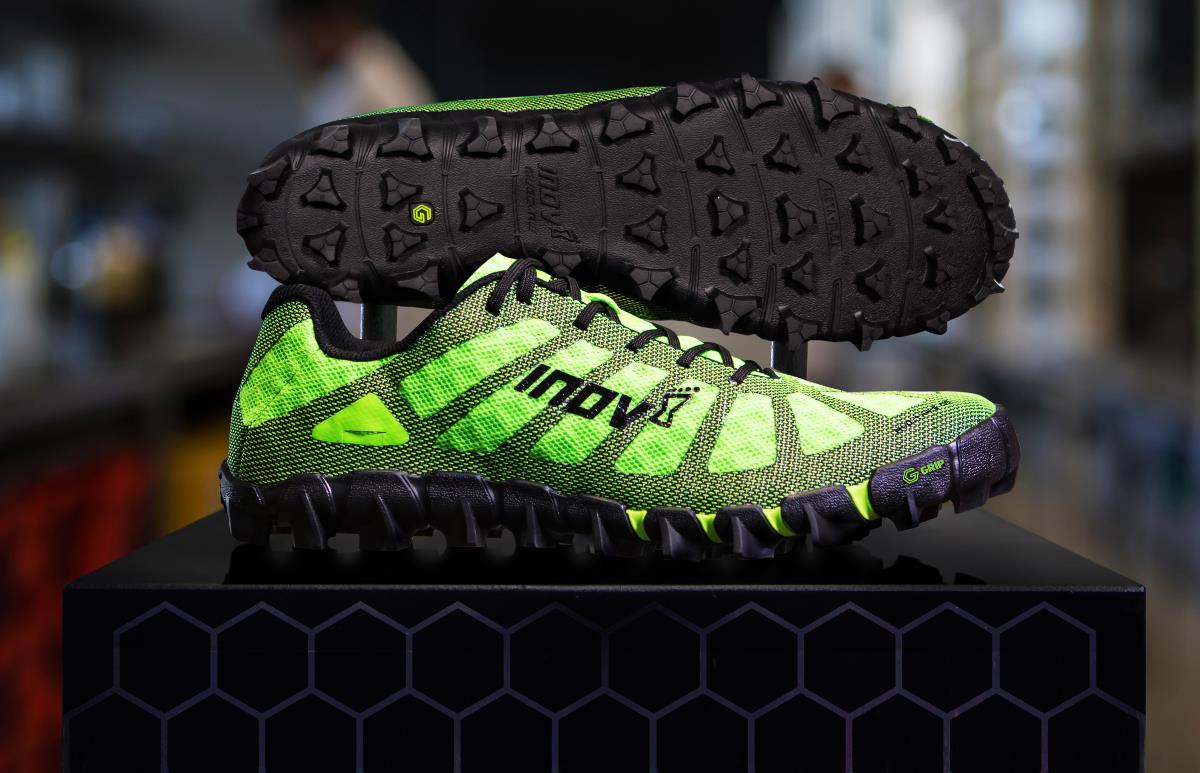 Graphene Shoes – The Future Of Footwear Has Arrived

In 2018, the world’s very first graphene shoes for running have hit the market. Shoe manufacturers are always looking for better ways to create better shoes. And in graphene, they have found a really good way of doing so. 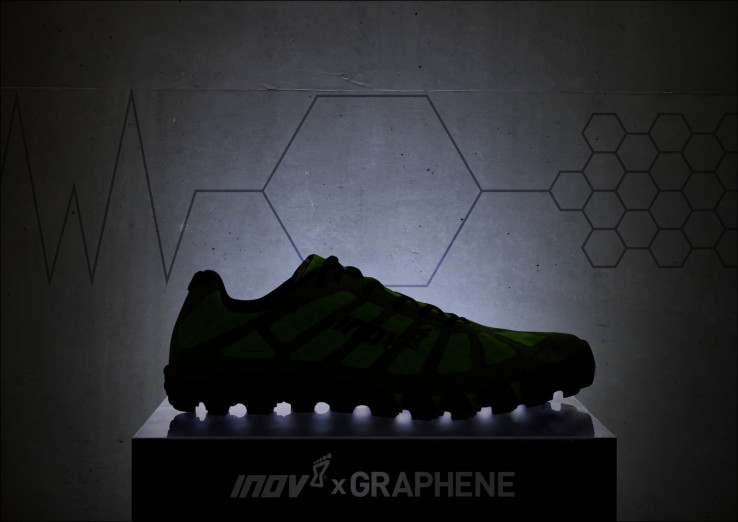 Look at that design. Nothing like a hexagonal carbon structure to make a good running shoe

Graphene is a so called miracle material, that was discovered serendipitously by a researcher who was actually trying to research something completely different. Technically speaking, graphene is a hexagonal structure made of carbon atoms. In essence, it is molecular chicken wire.

But contrarily to chicken wire, graphene has many fantastic uses. It’s a so called miracle material that has proven to have so many advantages that it’s hard to understand just how impressive this material is. Graphene is made from graphite. Graphite was first mined 450 yars ago in the Lake District fells of Northern England.

Grpahene is a million times thinner than a single human hair. It is more conductive than copper. And in case you know nothing about material science, then take it from me that copper is highly conductive! Graphene is also transparent and very flexible.

For example, graphene could be used to make batteries, because it charges incredibly fast. It’s also capable of holding larger charges for longer. Graphene is also very flexible, yet very strong. Stronger than steel by a mind blowing factor of 200x, at a fraction of steel’s weight. This makes it suitable for bullet proof clothing, for example. But it also makes it very suitable for making shoes out of. Because we always need better materials for making shoes, ofcourse.

Using graphene, batteries can be made flexible. They can be manufactured to sit straight in the textiles of our clothes. In the future, we will not have to carry cumbersome battery packs. Instead, we will be carrying a power charge with us in every single piece of clothing we wear. Our clothing will likely have displays as well, to let us know how much charge we have left.

Don’t ask me how we will recharge our wearables in our wonderful graphene future, because I have no idea yet. But if I’d have to take a guess, I’m gonna go out on a limb and guess that we’ll also have tiny little, flexible solar panels manufactured into our textiles as well. Because who wants to sit there with his clothing hooked up to an electrical outlet for a few minutes, am I right, my dear readers? 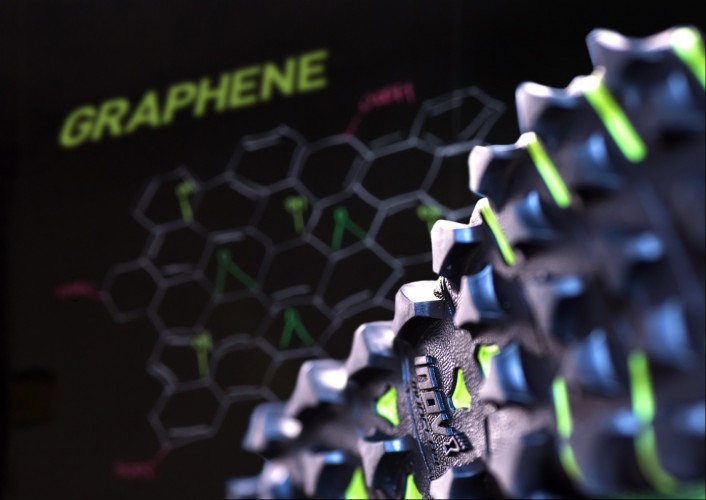 Look at that majestic grip!

Footwear Of The Future

With a material that is this fantastic, you have to wonder how long the shoes of the future will last. Will shoe manufacturers simply raise their prices, because shoes will last twice as long? Will they purposely dilute their graphene shoes with other materials, because a 100% graphene shoe’s sole would essentially last forever?

From the time of its discovery and in the following years, graphene has been expensive to produce, which is why it hasn’t been used in real world products yet. But that is about to change with the advent of cheaply, massively produced graphene. If you’ve been following the technology news, then you’ll have seen graphene related news articles being posted frequently over the past few years. But no graphene related breakthrough has ever made it to the market in the form of a product… up until now.

The University of Manchester has teamed up with a British sportswear brand called inov-8. That reads ‘innovate’, in case you hadn’t noticed it. And with this innovative team-up, I’d say inov-8 is doing its name a lot of justice.

Dr. Aravind Vijayaraghavan has stated that their unique formulation makes outsoles 50% stronger, 50% more stretchy and 50% more resistant to wear & tear than industry standard rubber, which does not have any graphene in it.

In the near future, the best running shoes will be graphene running shoes. Runners have very high demands when it comes to their footwear. Every single step they take while running, exerts pressure onto their outsoles. If the outsoles aren’t functioning properly, then those impacts are going to be absorbed by the runner’s own feet, ankles, knees and even the lower back. Running on worn out running shoes is a great way of screwing up your feet and legs. You’re basically gonna be looking at a life long of foot pain. 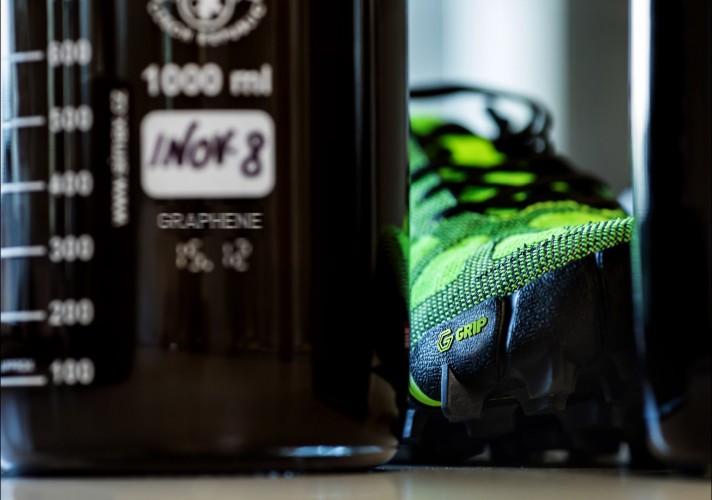 They’re shoving a whole bottle of graphene into those soles. All for maximum grip, strength, flexibility and endurance. No more compromise. You get max everything.

Previously, shoe manufacturers had to make compromises in order to deliver the best running shoe they envisioned. But with a little bit of help from graphene, no more trade offs need to be made. You can create the perfect running shoe with graphene. There are no more compromises. It makes shoes flexible, strong, grippy and durable to the max, all at the same time. The limits of shoe performance as we know they, are about to be crushed.

With the advent of 3D printing shoes (I’m looking at you, Adidas) and now graphene shoes, we are truly entering a whole new era. Innovation is starting to become more and more important in clothing and footwear. It’s a trend that I foresee growing and growing over the coming decade or 2. And quite frankly, it has me thrilled. It starts with graphene shoes, sure… but one day, I’m betting we can have integrated circuits in our shoes and clothes. Imagine having a display on your sweater or shoes, letting you know what lifespan it has left.

The possibilities for apparel and integrated circuits are truly endless.

In the coming decade, expect many more graphene sportswear. Graphene has the potential to revolutionize the entire world of sports. There are so many types of sports equipment that you could use this material in, it’s not even funny anymore. Tennis balls, spears, frisbees, barbells, sweatbands… you name it.

But it’s not just the world of sports that’s going to get rocked. It’s the entire world. As graphene is becoming cheaper and cheaper to mass produce, you will see manufacturers of all sorts of products jump right on top of it in order to improve their products. Think of surgical equipment, plumbing pipes, skate boards, cars, bicycles, displays… evertyhing. It can all be made stronger and more flexible by simply mixing in a little bit of graphene. We all know a smartphone screen or two that would’ve survived if only it would’ve had graphene.

In this case, inov-8 is taking the lead. And I thank them for it. At one point, somebody had to do it. And these guys stepped up to the plate and just went ahead and did it. Kudos to you for doing so, inov-8. You will go down in history as the first to take advantage of the world’s strongest material.

In 2018, inov-8’s graphene running shoe hit the market and retailed for around the £150 mark. That’s British pounds, because these guys are Brits. In USD, this would translate to around $200. That’s a hefty price to pay for a shoe, but then again, it will give you better performance and last 1.5x longer as well.

But that’s just talking durability. In the meantime, they’ll also give you better grip and better support. So all in all, graphene shoes will definitely be a step up from everything else that you’ve been used to in the past few decades.

I am confident that graphene production will be made cheaper in the years to come. This means that products making use of graphene, will also see their prices lowered. I don’t know about you, but I’m not gonna sit here waiting around for that. I’m shelling out $200 for a good pair of graphene trail runners by inov-8 as soon as I can get my hands on them.

I’m stepping into the future.

Are you with me?

5 thoughts on “Graphene Shoes – The Future Of Footwear Has Arrived”