9 Tips for Staying Safe While Hiking During Hunting Season

Have you ever gone hiking during hunting season?

Sometimes, hikers get hurt by accident.

We’ve all heard the precautions about hiking while the hunt is on.

While most hunters are sure to verify their target before taking a shot accidents still happen.

If you’re planning on going hiking during the deer season, then you should take some extra precautions while you’re on the trail in order to ensure that you and those with you stay safe. 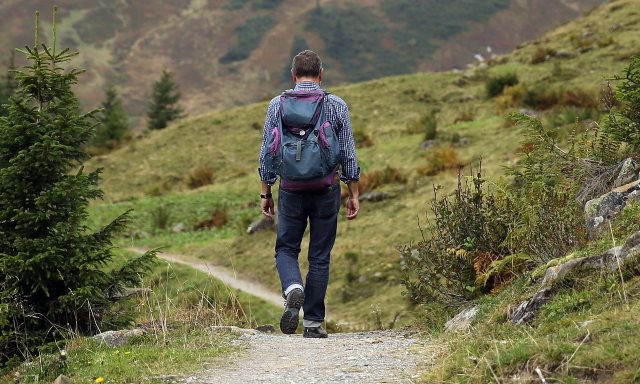 A lot of us have a tendency to move quietly while hiking, particularly if we’re in a small group. After all, it increases your chance of stumbling upon wildlife unawares and seems like a respectful thing to do.

If the season is on, then this is exactly what you don’t want to do. You don’t have to bang pots and pans like you’re dragging in the New Year, but be sure to make obviously human noises. Talk with your friends, enjoy the area and don’t try to disguise your footsteps as you’re going along.

If you’re making noise both hunters and animals will avoid you for the most part. When there’s human activity in an area animals will naturally move away from them. The hunters know this too, there aren’t likely to be many deer hanging around if you’re with a group of people moving down the trail and talking normally.

Heavy footwear is also a good idea, if you’re the type to hike in trail running shoes then opt instead for a pair of heavy hunting boots or something so you can make some definite “human” noise while you’re out for your hike.

So, make some noise and have a good time. You’ll keep both the animals and hunters away and it’s one of the most important things you can do to ensure your safety.

Particularly during the deer and turkey seasons, where there are a lot of new hunters in the woods, blaze orange clothing is one of the best lines of defense against accidents that may happen. A vest and a pack cover is probably the best way.

Since hunters use it to identify each other while out even the newest rifleman will be keeping an eye out for it.

If you don’t have your blaze orange ready on the morning you’re heading out, then wear bright colors. Let your wardrobe get loud and dig out those hideous clothes you never thought you’d wear for the day.

Either way, you definitely want to avoid earth tones. Olive, black, brown, and grey all hide your presence a little bit and can break up your silhouette. Avoid camo patterns as well, for obvious reasons. A hint of movement and a broken silhouette is asking for an accident involving a hunter who’s not being properly cautious. This is a good time to let the camouflaged hunting backpack and BDUs sit in the back of the closet, especially if you don’t have a vest and pack cover.

Don’t forget the dogs as well. They’re probably at more risk than you in most situations and there are vests designed for dogs of nearly every size that can be readily had from most outdoors suppliers. 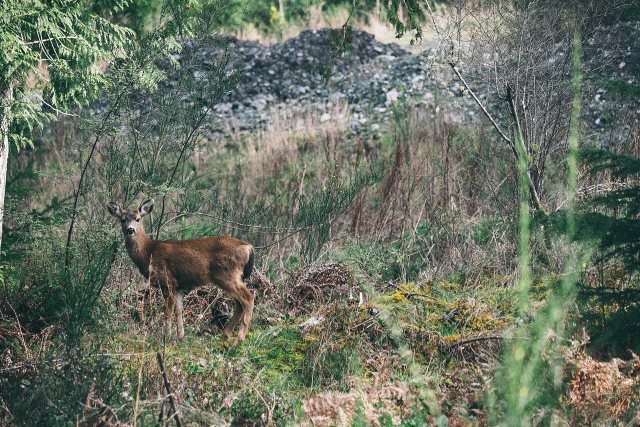 The truth is, you’re probably not at much risk during the open seasons. People who are looking for small game likely have their own honey holes and tend not to be near trails which are heavily trafficked anyways.

Deer, and to a lesser extent wild turkey, are the biggest draws for most novice hunters making these seasons the ones which are more likely to result in accidents. Make sure you know when the seasons are in your area if you’re hiking on land where hunting is allowed.

4. Know the Most Dangerous Times to Be Hiking

If there is a season in effect in the area where you’re planning on going out, it’s a good idea to get a handle on when the animals are most active.

Deer, for instance, are mostly active at dawn and dusk. Both of these times also limit visibility, which increases your chances of getting hurt while you’re on the trail. You might want to wait until midday to go out if there are hunters in your area.

If you’re regularly in the area you likely have a good idea of when the animals are most active anyways, but you’ll want to do a bit of research to make sure that everything is going smoothly during your time on the trail.

Being well equipped with a complete set of hiking gear is not enough. You need to take the time to get to know the area you are going to hike.

In addition to talking and making a bit more noise than you would if you were strictly trying to observe wildlife, you may want to make your presence known a little bit more loudly if you hear gunshots.

There’s no really established call to make sure the hunters know you’re there, but a quick yell of “Hey, we’re on the trail!” if you hear shots in the woods should be enough. Keep in mind most rifles have a sound that will carry much farther than your voice, of course, but if a hunter knows there are people present they’re likely to be much more cautious.

A yell or two should be enough. It’s a bit rude to keep making loud noises for extended periods since it can also scare off the hunter’s quarry.

6. Stay on the Trail 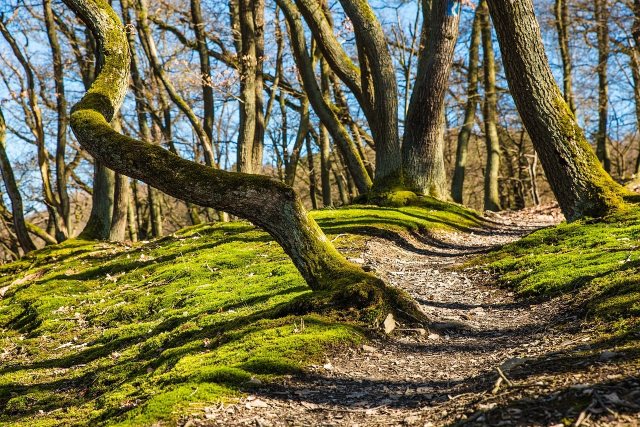 There are much better times of the year to go exploring off the trail than during hunting season. This really isn’t the time to be bushwhacking if people are hunting. Most hunting seasons are pretty short anyways, so you can always go see what’s over the next hill when it’s over.

You should also avoid animal trails while there are hunters in the woods. If you’re not the outdoorsy type just keep an eye out for skinny trails which aren’t cleared properly, these are usually the routes which animals will take while they go about their daily activities.

In most places, hunters will definitely stake out these trails and it’s not only needlessly putting yourself at risk but it can also scare off their quarry which isn’t good for anyone. 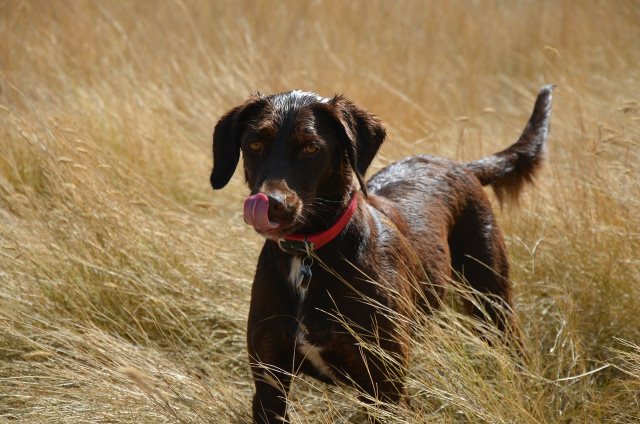 If you like to hike with your dog, then you’ll want to take some extra precautions to make sure they’re safe. Reflective vests are a good step towards preventing accidents, but you should always keep your dog on a leash while you’re hiking.

Keep in mind state regulations as well. In some states it’s actually legal for a dog to be shot if it’s pursuing deer or other select big game animals. Don’t risk it, keep them on a leash at least for the season. They can enjoy the woods fully the rest of the year.

Dogs have a much higher risk of being mistaken for a game animal than humans due to the fact they’re on all fours. A blaze orange vest is a good start, but you might want to make sure that you also have a brightly colored leash as well.

By using a highly-visible leash someone a good distance off can see the dog is “tethered” to you.

8. Hike Where There Are No Hunters

If all else fails, then just make sure that you’re out somewhere there are no hunters.

In the United States the public places where hunting is allowed will vary from state to state. Most National and State Parks don’t allow hunting, and even if they do it will be in a few relatively small areas.

Honestly, many hunters who are new have to cut through a lot of information just to figure out where they can hunt.

If the whole thing makes you nervous, then you might be best served by finding areas where hunting is forbidden entirely during certain seasons. By doing so you can cut out virtually all of the risk of an accident occurring and this is probably for the best if you’re getting jittery about the prospect of being in the woods with active hunters. 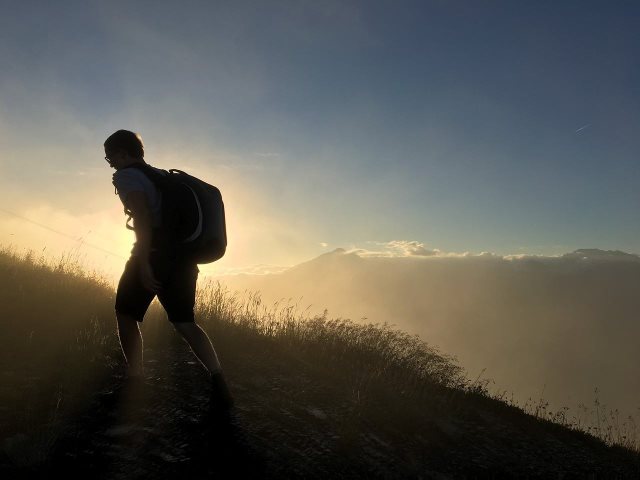 Staying aware of the situation around you is something you should be doing while hiking anyways. It’s a good habit to get into and you can avoid potentially rough encounters with wildlife by focusing on your situational awareness.

Sometimes all of the above can’t keep you one hundred percent safe. Depending on the make-up of the surrounding area, some people are known to hunt illegally and people do make stupid mistakes on occasion.

Keep your eyes open from the time you get to the parking lot until you get back. Obviously, you don’t want to ruin your whole trip worrying but make sure that you keep an eye and an ear out. Not only will it help keep you safe, you might also be able to enjoy some of the smaller details around you that you haven’t seen before.

There’s no need to be nervous if you’re out on the trail during the hunting season. A little bit of caution goes a long way and if you follow the above tips you should be able to reduce the chance of anything unfortunate happening to nearly zero. So get out there, exercise a little bit of forethought, and have fun on the trails year round.