When the temperatures start dropping, that’s when you can see the men being separated from the boys. While the boys like to stay indoors, the men like to leave the home and go do something extremely manly. Such as hiking outdoors during the wintertime. Not too many people are willing or capable of making themselves endure a rough hike when the outdoors are blanketed in snow. But for those that do, it’s a veritable celebration of nature in all its glory. But no matter how manly you are, you are still going to need a good hike boot for wintertime if you are going to survive a trip like that. Hardly anybody in their right mind would dare go at it bare footed, so neither should you.

Francois Salomon was an avid skier, who respected the outdoor lifestyle and had a real passion for it. He founded Salomon in 1947 and has been producing reliable wintertime footwear ever since. When it comes to winter footwear, you came to the right address. Ever since the company was founded, it has made sure to come up with innovative designs for footwear that supports trail running, mountaineering, adventure racing and hiking. While the Salomon company was acquired by Adidas in 1997, the Salomon spirit still clearly lives on.

There are many different kinds of winter hiking boots available on the market today. How is a guy ever supposed to know which one is going to be the best for him and his purpose? Different situations require different boot properties. You’ve got to select the right boot for the right winter hiking trip. So always do your own research, unless you want to find yourself shivering in your boots during your trip. One really great boot for doing a good ole’ winter hike, is the Salomon’s Quest 4D. So let’s inspect this boot up close to see if it’s any good, shall we? 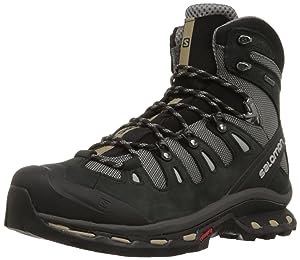 The boot is made of leather and textile and is imported. The sole is entirely synthetic, which is a good thing, because hikers always need lots of traction and durability. Especially the ones that go at it in the wintertime, which is very demanding not only on the hiker, but also on his boots.

Their shaft is around 6″ from the arch, which is pretty high by most hikers’ standards. These boots will give you more ankle protection than you need in most cases. And during the cold, there’s nothing wrong with having some extra ankle protection.

They weigh around 640 grams a pop, which is considered to be lightweight when it comes to hiking boots for men. For women’s hiking boots, slightly different standards apply. But this is a man boot review, so I won’t dive into that right now.

This 640 gram figure is for the US 9M size. If you’re wearing a size lower than that, then the boots will weight considerably less. For example, if you’re a US 7W, they’ll only weight 560 grams.

It has a pretty rugged lacing system, that won’t let you down at times when you most need it. Hikers absolutely need a good fitting boot. A boot with a crappy lacing system isn’t going to cut it. The laces on a good trekking boot need to be sturdy and will need to let the wearer give himself a custom fit, so that the boot fits snugly and comfortably while the hiker goes about his business, treading on rough trails and climbing slippery stones.

Thanks to the GORE-TEX lining, Salomon’s Quest 4D winter hiking boot has waterproof protection. No moisture is going to get in here. It will only be able to get out, which is precisely how you want it. This boot also protects your toes, thanks to the rubber toe cap, which is designed to really take a beating. Salomon’s 4D chassis gives it stability and protection, making you stand even more firmly and confidently in your boots during wintertime hikes.

And then ofcourse, there is the EVA Ortholite insole, which is removable and can be replaced with an orthotic of choice. Last but not least, there is the Salomon’s Contragrip outsole, which has been designed to give you the very best grip, no matter what surface find yourself standing on. The ergonomics of the tongue have been improved with regards to Salomon’s latest model.

Salomon is one of the very best go-to brands when it comes to footwear for wintertime outdoor activities. These Quest 4D winter hiking boots are a great example of that. They are considered to be the pinnacle of winter hikers by many. All in all, with the Salomon Quest 4Ds you are getting the knees bees when it comes to lightweightedness, protection and stability.