Some days, you just wanna wear a decent pair of combat boots just because they look awesome. But then you’ve gotta go to work and put on your work boots again.  But what if you’d rather be wearing your combats instead? Well, then you’ve just gotta put on these here combat boots for work. Or are they work boots for combat? I dunno man, I can’t figure this stuff out anymore. Anyhoo, they look pretty slick, don’t you think? I think that if you’d arrive at work wearing these, your colleagues are going to think you’re totally bad-ass.

These Maelstrom Landships that I’m going to review here are not true military boots. Last thing I heard, boots with zippers were forbidden in the military. Well, these boots have zippers, so you’re never going to be a real soldier in these. However, these weren’t made for the fighting man. These were made for the guy that wants to look tough while still being able to enjoy the comfort of everyday citizen life footwear. I know, it’s all very confusing, right? Best not to think about it too much. Let’s just have a look at these awesome combat/work boots to see if they aren’t a great fit for you! 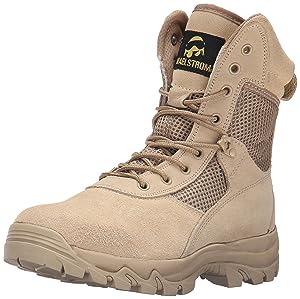 These imported Maelstrom Landships have been made of leather and fabric, but come with a rubber sole, as I’m sure you’ll have noticed from looking at the image to the right. The leather is polishable, which is good news for you, because it means you can keep them nice and clean looking for a long, long time.

The mesh uppers are very breathable. They also come with a breathable moisture wicking lining, meaning that they’ll get rid of any moisture build ups on the inside. But at the same time, moisture from the outside cannot get on the inside. Talking about getting the best out of both worlds!

They are completely slip and rubber resistant, thanks to the high quality, durable, rubber outsole. The removable cushion insert is very shock absorbent, and will cushion each and every step, all day, every day. The padded collar offers a bit of extra comfort, as well as the padded tongue. Next to the removable insole, the midsole is also shock absorbing. So the boot basically absorbs shocks all throughout its construction. That’s one of the reasons why it’s a good boot for wearing to your outdoor job, whether it be painting, chores around people’s homes, or something similar.

They are pretty lightweight and have an athletic cemented construction. A cement construction means that they’ve been built to last, to increase their durability. Thanks to their zipper on the side, they are easy to take on and off. That way, as soon as you get home from work, you’ll be able to throw them off and slide right into your comfortable home slippers. Their composite shank will give you that much needed extra stability and support that will help you through your long and hard work day.

Keep in mind that these boots have soft toes, so if you’re worried about heavy stuff falling on your toes, then it’s better if you keep looking. However, these could very well be used for hunting or maybe the occasional hike. It’s a cheap combat boot for narrow feet. It’s very suitable for those of you who don’t want to take out a second mortgage for a good pair of boots, but at the same time are also not interested in getting the cheapest of the cheapest footwear.

Cheap footwear may seem appealing at first, but when it comes to footwear… you really do get what you pay for. Better to pay a little more. These Maelstroms give you some great bang for the buck, as they are in between low priced and high priced. Matter of fact, they’re priced just right.

Many online reviewers are very positive about the Maelstrom Landships, saying that they are very comfortable, look really good, mostly fit as expected and that they last a long time too. If you’re on your feet for long times on end, such as 12 hours, then these boots will remain comfortable all throughout that 12 hour period. One reviewer even went so far as to say that they vented better than some basketball shoes. And that’s saying a lot, considering the fact that bball shoes absolutely have to be able to vent, because those are sports shoes that are worn in a highly intensive physical activity!

All in all, the Maelstrom Landships are a great buy for those looking for a comfortable combat boot for work.