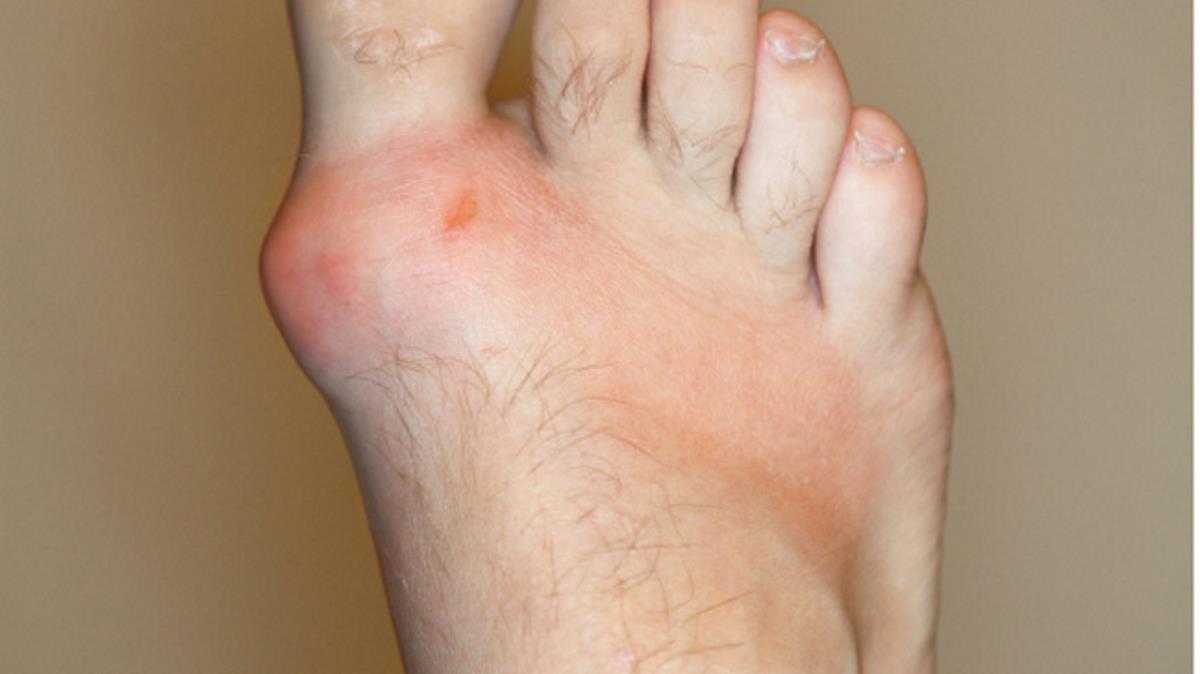 Tackling Gout: What You Need To Know About This Painful Foot Condition

There are many different ailments that can cause severe pain and make it especially difficult for a person to function, and gout certainly ranks high up on the list as one of them. While many people have heard of this painful foot condition, unless they’ve been afflicted before, chances are they don’t know much more than the name and some idea that it involves foot pain.

First time gout attacks are usually pretty mild. But don’t ever tell a person suffering from gout that it’s no biggy. You’ve got to take it seriously and start treating it as soon as possible. Repeated attacks of gout can lead to more serious medical conditions if left untreated. 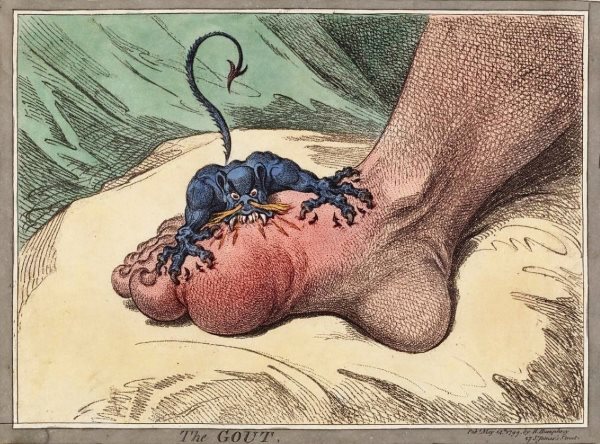 Gout is a non-permanent form of arthritis that often affects joints. This affliction is known for coming on all at once and causing a great deal of pain. The foot and big toe areas in particular are renowned for being areas where gout trends to strike on a reoccurring basis. The pain often comes with a lot of tenderness and swelling, which is why it’s so strongly associated with the foot. A person experiencing an attack of gout is going to be limping heavily at best, and will not be able to walk in the worst case scenario.

Unlike many forms of osteoarthritis that many people are familiar with, this is not based on age and it is not a permanent condition. This means not only are treatments readily available but prevention can play a big role in making sure this does not become a recurring issue.

What Are The Most Common Symptoms Of Gout?

Spotting gout is a fairly easy process as long as the person knows what to look for. In fact, if the case of gout is one of the 50% that are associated with attacks on the big toe joint, then it will be extremely hard for any patient to ignore.

While there are a large number of symptoms, most gout attacks will look the same. They will arrive as sudden intense bursts of pain that don’t go away. That sudden severe pain will take place by a joint somewhere in the body and be accompanied with swelling, stiffness, and a lot of heat that seems to just radiate off of the body in that area. Many times the skin will be darkly red, sometimes to the point of being purplish in color.

Over half of all gout attacks will be at the big toe, but obviously that also means half the cases will be found elsewhere throughout the body. 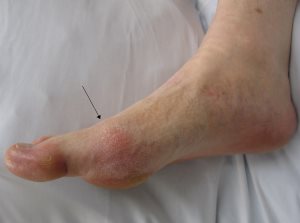 Simply put, gout is caused by a buildup of uric acid in a person’s blood. So what does this mean? Basically uric acid is a by-product from your body doing what it needs to when it breaks down certain types of organic food. Foods that contain purines require additional work to break down for use, and uric acid is the result. A little of it in the body is absolutely normal, but it’s when there’s way too much that problems may start to develop in some individuals.

Even high levels of uric acid are okay for many people, but once a certain tipping point is hit and there is too much uric acid staying in the blood, then it will begin to form crystals. This forming of crystals is the cause of gout and the very painful symptoms that follow it.

Foods that are high in purines tend to be certain types of meat, fish, and organ meats. That being said, sometimes certain people who are more genetically pre-disposed to gout may have a flare up due to issues like drinking too much alcohol over time, or from certain types of medication, especially water pills and diuretics.

How Is Gout Diagnosed?

While a self-diagnosis might be fairly easy to make in many cases, to get the best, fastest, and most effective treatment an individual who is suffering from gout will need to go to the doctor to get an official diagnosis.

There are actually several tests that can help with determining whether or not gout is the root cause of the problem.

Just a few of those tests include:

The exact test or tests will vary based on the doctor, the equipment available equipment, and the local common course of treatment. A musculo-skeletal ultrasound, for example, is extremely common in Europe and much less common in the States.

The joint fluid test take place when a doctor uses a needle to draw fluid directly out of the afflicted area. If a simple microscope inspection shows crystals from uric acid, that’s a clear red flag for gout. This is one of the most common tests for detecting and diagnosing gout.

Blood tests are the next most popular test in most places. A basic blood sample is searched for uric acid. While this can give a clear red flag, some places criticize the blood test as a standalone diagnostic test because it can give some false positives or negatives since many people have high uric acid levels but no gout, or all the symptoms other than a build up of uric acid. In most cases blood tests will be solid, but they don’t work all the time.

Joint x-rays are more as a way of making sure other causes aren’t at fault like hairline fractures or other hidden joint issues that could explain the inflammation being experienced.

The dual energy CT scan is not a common way of getting a diagnosis, in part because it is a specialty test and can be quite expensive, but it can be a very accurate way to find urate crystals hiding in joints when the pain is there but the tell-tale inflammation is not. 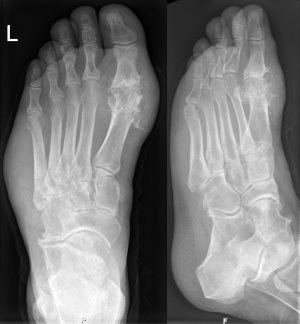 The good news is that there are multiple avenues of treatments that can help a patient overcome their temporary gout affliction. Often two types of medicine are given: one to immediately work on relieving the pain and breaking up the uric crystals in the body to relieve the symptoms and another medicine to help prevent recurrences from taking place.

Getting an actual shot of corticosteroids is one of the most common immediate treatments. This helps strengthen the body, especially in the afflicted area, and give your immune system that little boost to break up the crystals and start relieving the gout. Prednisone is one of the most common forms of these steroids, but there are others. They can also come in prescription pill form in some situations.

Colchicines are pain killers that can be safely taken with many types of treatment medicines and are often included as a way of attempting to deliver some immediate relief to a patient as the steroids or other medicines are taking their time to kick in and address the actual problem in the body.

Treatments start out at their strongest and then gradually get smaller over time. As the gout gets better, less medicine is needed to help a patient get back to their normal self. This is why even steroid treatments often downshift to a set daily amount of non-steroid anti-inflammatory medicines like ibuprofen.

Major symptoms will normally begin to lessen as treatments often work at a noticeable level within the first 24 hours of being administered.

The types of medications that help block uric acid production in the body in the first case are referred to as xanthine oxidase inhibitors. The idea is that by lowering the uric acid levels, the risk of gout is also lowered.

A short list of examples of these inhibitors include:

Then there are the medications that help with the actual removal of uric acid. Generally all these medications will be some type of Probenecid. Probalan is the most well known of these drugs currently, and depending on the situation a doctor may decide to include this as part of your specific gout treatment.

Finally, as any good doctor will tell a patient, avoiding making gout a recurring issue means that even after taking these medications and getting the proper treatment after a successful diagnosis, prevention must be talked about. Putting out the flaming, fiery pain that gout causes, is much harder if the patient leads the type of risky lifestyle that just keeps on feeding it.

How To Prevent Gout? 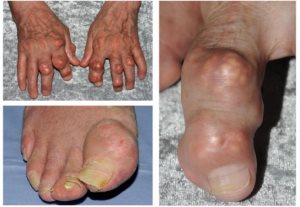 The only way to help prevent gout is to understand what factors make it more likely to strike. Some people do tend to be more genetically pre-disposed to gout. This means that if a person has had parents, grandparents, or relatives who have suffered from gout or struggle with it on a frequent basis, there is a fairly decent chance that they might be more prone to suffering from gout themselves. If this is you, then you need to be extra careful about managing your uric acid.

Factors that increase the risk of gout:

Someone who is overweight can cut the risk of gout by losing some of that excess weight through regular diet and exercise. The more overweight and obese a person is, the more susceptible they are to getting gout. Often times dropping 20 or even 10 pounds of excess weight can have a major beneficial effect.

Watching the amount of alcohol and very sugary drinks a person drinks is also a major part of preventing gout. This includes soda, fruit juice with added sugar (which is most of them), or anything that is remotely similar. While moderate alcohol consumption isn’t an issue, drinking in excess will heavily increase the chances of uric acid building up and causing issues with gout.

A person choosing to get in moderate daily exercise and watching their diet will have an excellent chance of preventing painful relapses of gout in the future.

There are a couple of important myths that need to be dispelled about gout. The first is that it comes from high meat and high protein diets. This can be true, seeing as how purine heavy foods tend to be in red meat and certain fish, but it is worth noting that it’s not the high level of proteins or meat that causes the uric acid build up.

The types of fish, types of meat, and types of protein being consumed are what make all the difference when it comes to whether or not a diet is likely to contribute to another outbreak of gout or not. Stay away from liver, anchovies, organ meat, mackerel, and too much red meat. Many other fish and meat are fair game.

Finally, there were food studies in the late 1990’s and early 2000’s that showed purines from beans seem to have no effect on creating uric acid in the body. So despite earlier beliefs that they contributed to gout, they actually do not.