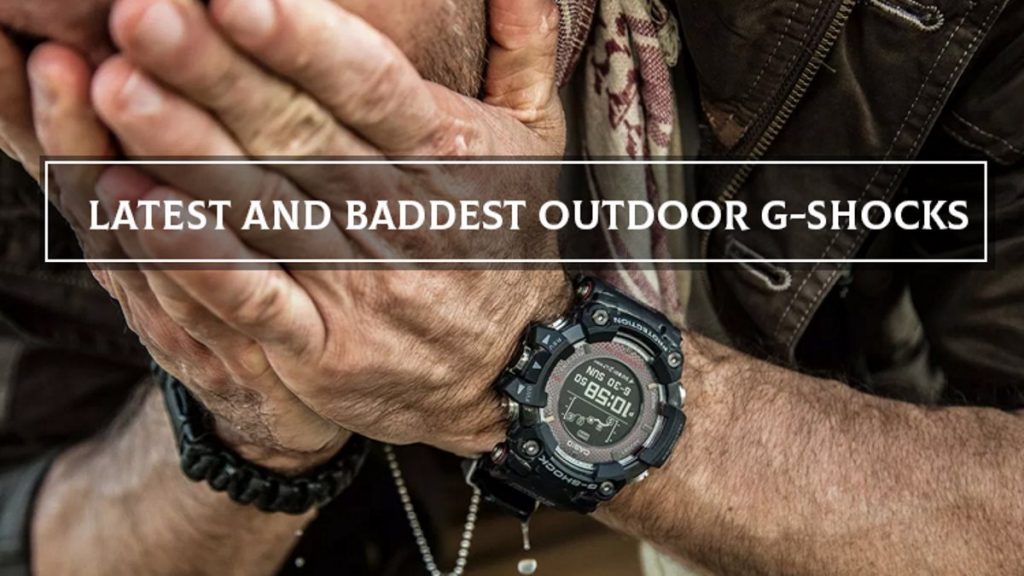 The times when watches were only a piece of jewelry are all gone. Early enough did watch manufacturers have to learn that customers need their watches to include more and new features, without ever compromising on the looks or on their fundamental purpose (tell time, that is).

Why Does G-Shock Stand Out?

Some watches are going to stick with you for their intricate looks or the luxurious feel, whereas others are going to become your no.1 tool when going for a hike or diving in the ocean.

If we talk about the Casio G-Shock watches, it’s the features and the build that impress every time. G-Shock watches are probably the most modern equivalent of robust watches that take a splash and a fall.

G-Shock watches were born with water and shock resistance in mind – G-shock stands for Gravity shock. They are watches designed for the military professionals and outdoor enthusiasts more than anything else.

But it’s not only the water and the shock resistance that define the G-Shock watches. They also present gravity, electric shock, vibration, impact, and low-temperature resistance.

All in all, G-Shock watches stand out with their toughness, durability and fresh looks. The appearance has never been compromised when it comes to G-Shock watches.

What is the Triple Sensor?

Some G-Shock watches come with Triple Sensor, and many outdoor enthusiasts go for it. The triple sensor is, in fact, a tiny three-layer sensor. The technology includes essential functions for the watch.

The triple sensor means that the watch includes a thermometer (for measuring the outside temperature), a barometer (for identifying the air pressure) and a digital compass (which shows the cardinal point, helping one know how to find orientation).

What are the Latest G-Shock Watches that come with Triple Sensor?

A good watch is convenient, and it also makes a good impression about your choice of accessories. Thus, we recommend the Casio G-Shock Rangeman Solar Assistant GPS navigation watch as a perfect recommendation for your needs. The watch is suitable for use in the most extreme conditions and is also easy to set up. It comes with Triple Sensor, that will help to measure various factors include the temperature, atmospheric pressure and more.

Even more, the GPR-B1000 is capable of GPS navigation – which is a modern function in watches. Yes, with this watch, you can keep track of your movement, perfect for trails, hikes and more. The GPS collects data from satellites and displays your location or a convenient route for your needs.

To make things better, this watch will even save point and track data. These include information such as the latitude, altitude and more. The watch also has Bluetooth functions, which lets you connect it with your smartphone. As far as material construction goes, the watch features a dust and mud resistant structure, to make it highly durable.

And, there is a better surprise that you would expect with a watch. The GPR-B1000 comes with wireless and solar charging systems. Thus, you never have to worry about electrical power or replacing batteries each time. With an average charge of 5 hours, this watch will deliver more than 30 hours of reliable power. 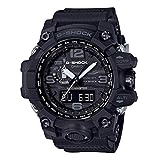 Even if the new Rangeman may steal the glory, some other models impress just as much. The G-Shock Triple Sensor Mudmaster Black Watch GWG1000-1A1 is one watch to take to the sea, in the air, or on land. Not only is it tough, but its extreme black and subtle coloring helps it show the information clearly and easy to read. The watch makes no compromise in terms of toughness and comes with mud resistant structure (it’s both mud and dust resistant), vibration resistance structure and has Triple Sensor. The precision of the temperature readings, the bearing or the barometric pressure/altitude is reliable and consistent.

The double LED light is going to light the face and the digital display, so it’s not difficult to read the watch in any condition. The watch comes with Tough Solar, which only enhances its functionality.

If you work or hike a lot, you know that getting dirt or debris into your gear is not fun. The watch sure makes an impression with the mud resistance build, and nothing gets inside the clock, no matter how deep you are in the dirt. The watch features several gaskets on the pipes, guiding the buttons and shafts and keeping the mud at bay. Not only do the pipes protect the pins from impact, but they also improve the performance of the buttons.

The sapphire glass with non-reflective coating, the vibration resistance, the 660ft water resistance, the screw lock crown- these are all features that sustain the toughness of the watch.

The list of functions includes the battery level indicator, the Power Saving Mode, the countdown timer, the Hourly Time Signal, the five alarms, and the stopwatch.

The Mudmaster builds for itself the name of a robust, mud-resistant watch that is resilient and accurate, without ever disappointing. This is definitely one of the top G-Shocks.

Another watch that comes with Triple Sensor is the CASIO G-Shock GW-9404KJ-3JR Love The SEA and The Earth Radio Solar Watch. Even if it’s still part of the Rangeman series, it does come with its features and functions.

Sure, its looks are going to be the very first thing to notice about it, as the watch pops out with its fun and unusual appearance. The clock is one of the watches within Love the Sea and the Earth Series. Its design has the Kakapo parrot as a source of inspiration, hence the colors. The bezel resembles the bird’s face as it has light and dark accents. The band reminds of the bird’s bright green feathers. The design continues with the yellow details on the face, whereas the Earth watch logo shows on the gold IP buttons and the LED backlight.

Just like the Rangeman, this one also comes with Tough Solar power, Triple Sensor and Multi-Band 6 timekeeping. It’s shock resistant, and the case is made of resin. The band takes the heavy-duty use as it has a carbon fiber insert.

You may set 5 time alarms and rely on the World Time, stopwatch, sunset/sunrise time display, timer, and the Full Auto Calendar. The Power Saving Function is always an excellent addition, and so is the battery indicator.

Even if not every hikers out there is going to go for its bright and fun colors, the watch is reliable, accurate and may be the best choice for many outdoor enthusiasts.

Even if it’s not a G-Shock, the Casio Men’s Pro Trek PRG-270-1 Tough Solar Triple Sensor Multifunction Digital Sport Watch is still a first watch for the outdoor fans.

Way back in the day, the Pro Trek was known as the Pathfinder, which is another famous Casio model that targets outdoor activities. The Pro Trek reminds one of a G-Shock, as it includes Tough solar power, Multi-Band 6 automatic radio time-syncing and Triple Sensor (altimeter, barometer, and thermometer). Some years ago, if you wanted to get a watch with Triple Sensors, the Pro Trek was one watch to get.

The Pro Trek comes with similar features as G-Shock and for a lot less money than G-Shock. Even though the watch is sturdy and takes the heavy outdoor use, it’s not a G-Shock. Therefore, it may not handle an extreme impact.

You can, however, use it when swimming, diving and even when it’s cold outside, since the watch resists low temperatures. The watch has 330ft water resistance, full auto LED backlight with afterglow, five daily alarms, hourly time signal, countdown timer, 12/24 hour formats, full auto calendar, stopwatch. Its build recommends it for the outdoor activities as it can sure handle the challenges out there.